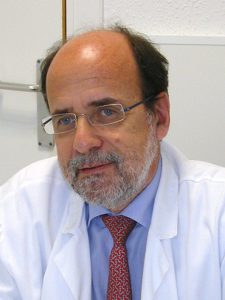 Professor Ramon Estruch is Senior Consultant at the Internal Medicine Department of the Hospital Clinic (Barcelona) since 2002. He is also Associate Professor at the Barcelona University since 1996, Member of the Board of Directors of the CIBER Obesity and Nutrition, Institute of Health “Carlos III”, Government of Spain, since 2006 and Member of the Advisory Board of the ERAB (European Foundation for Alcohol Research) since 2010.

The main research lines developed are the following: 1) Cardiovascular effects of Mediterranean diet 2) Effects of olive oil in cardiovascular risk factors, and oxidative stress and inflammatory biomarkers related to atherosclerosis; 3)  Mechanisms of the effects of moderate wine and beer intake: Effects on the expression and function of cellular and endothelial adhesion molecules related to development of atherosclerosis; 4) Effects of chronic alcohol consumption on heart, liver and brain; and 5) Effects Mediterranean life style on health.