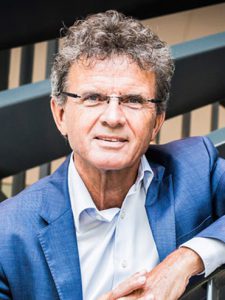 Frans Kok is recently retired professor in Nutrition & Health and head of the Division of Human Nutrition at Wageningen University, The Netherlands. He is the chairman of the board of the Dutch Beer Knowledge Institute since 2009.

He was trained in human nutrition in Wageningen (MSc in 1978 and PhD in 1982) and epidemiology (MSc 1984) at Harvard University, Boston USA.

From 2006-2010, he was Dean of Science at Wageningen University being responsible for the quality of academic research and postdoctoral training.  He was the scientific director of the graduate school VLAG and was a member of the program council of the Top Institute Food and Nutrition. From 1997 until 2004, he was director of the European Nutrition Leadership Program in Luxembourg.

He is a member of several national / international scientific committees. He chaired the Dutch National Health Council committee responsible for the 2006 Dietary Guidelines for the Netherlands and was one of the founders and first president of the Netherlands Academy of Nutritional Sciences.

His scientific research covers topics such as diet in disease prevention, dietary behaviour, and overweight, in particular diet and deficiency disorders in Asia and Africa. He has initiated and coordinated several large Dutch and European research programs.

He is the author of around 350 original scientific publications, the editor of three nutrition textbooks and a popular scientific book “Gezond eten, Gewoon doen” (Healthy eating, Simply do it).

He was elected a member and Chairman of the ERAB Board of Directors on 15th February 2016.