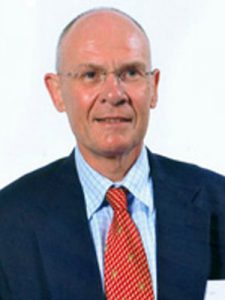 Philippe De Witte was Professor and head of the Laboratory of Behavioural Biology at the Université Catholique de Louvain until he retired in 2014. In 1987 he received a Fulbright Grant to complete a specialization in brain research at the NIH. He has also worked as invited Professor in Washington State University and the University of Colorado.

He is an Editor in Chief of Alcohol and Alcoholism and on the editorial advisory board of a number of leading Journals including: Alcoholism: Clinical and Experimental Research, Addiction Biology, Alcoologie, Alcohol and Amino Acids. He was President of the European Society for Biomedical Research on Alcoholism (ESBRA) for two terms from 1993 – 2001 and was the President of the International Society for Biomedical Research on Alcoholism (ISBRA, 1998-2002). He joined the ERAB Advisory Board in 2003 and succeeded Professor Oliver James as its Chairman on 1st January 2007. As Chairman of the Advisory Board he was an ex officio member of the Board of Directors. He stood down in September 2016.

His research interests include pharmacology and neurobiology of addiction including therapeutics and treatments. He is a member of a number of professional bodies including ESBRA, ISBRA, Société Belge d’Alcoologie (SBA), The Belgian College of Neuropsychoparmacology and Biological Psychiatry (BCNBP) and the Société française d’Alcoologie (SFA) and has published over 200 articles in scientific journals, twice as many abstracts and book chapters.