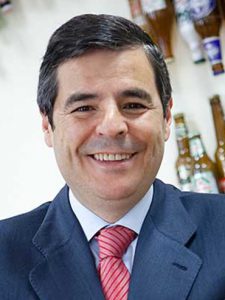 Law and economics graduate, Jacobo Olalla Marañón has spent most of his career as Director of the Manufacturers´ Spanish Federation of Mix Feeding Fodder (CESFAC), having previously worked for the Spanish Society of Intermediation (SEISA) and at the European Corporate Services.

In 1997 he became General Director for both The Brewers of Spain and The Malt Producers of Spain. He is Vice-president of Educational Patronage of the High School/Academy of Beer and Malta (ESCEMA-Spain); serves on the Technical Advisory Committee of the Beer and Health Information Centre and is a council member at The Hops Society.

Since 1988, he has been involved with the Spanish Industry Federation of Food and Drinks (FIAB); is a member of the General Assembly of the CEOE (Spanish Employers Association) and Vice-President of the Directors Committee of ECOVIDRIO (glass recycling organisation) as well sitting on several committees of The Brewers of Europe and the European Brewery Convention.

Jacobo is a regular speaker at international conferences and is widely published in the economic press and specialised magazines.

He was appointed as a member of the ERAB Board of Directors representing the industry in May 2004.