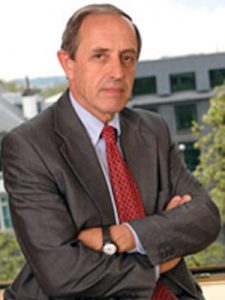 Mr Martin retired from the Confédération des Industries Agro-alimentaires de l’Union Européenne (CIAA) where he had been President since 2002 in July 2009.

He joined Unilever in France in 1968 after graduating from the Ecole Supérieure des Sciences Economiques et Commerciales (ESSEC). After various positions in the finance/commerce fields in France, the Netherlands (1977-80) and the UK (1980-83) he was appointed Managing Director of the Retail Division of Astra-Calvé in Paris in 1983. In 1986 he moved to the Ivory Coast as Chairman of Blohorn and in 1990 he was appointed Chairman of Van den Bergh Italy with the additional responsibility of leading the development of Unilever in the olive oil category in Europe.

In 1992 he was asked to design, set up and run (as Chief Executive Officer) a new Regional organisation Unilever Personal Products Europe, headquartered in Paris. Four years later he became Business Group President for Central & Eastern Europe (including Turkey), based in the Rotterdam Corporate Head office and a member of the Unilever Executive Council. In 2000, following the acquisition of Bestfoods, he was appointed Global Integration Leader in charge of leading the integration process. Between 2002 and 2006 he was in charge of the “Enlargement and Neighborhood Policy” working group of the European Round-table of Industrialists in Brussels Jean Martin was a member of the group of Conseillers du Commerce Extérieur de la France from 1997 and President of the Netherlands Section from 1998 to 2006.

In 1998 he was made a Chevalier de la Légion d’Honneur. He joined the ERAB Board of Directors in 2004.