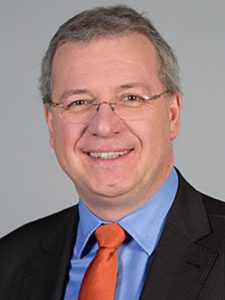 Markus Ferber, MEP, became a member of the European Parliament in 1994. Prior to this he graduated in electrical engineering and worked for Siemens AG (Munich) and Pfister GmbH  (Augsberg). He is a Member of the Committee on Economic and Monetary Affairs and Substitute Member of the Committee on Transport and Tourism. In 1999 he became Chairman of the CSU delegation in the European Parliament. Since 2005, Markus Ferber is also Regional Chairman of the CSU Schwaben.

He was a public member of the ERAB Board of Directors of ERAB from October 2010 to October 2016.