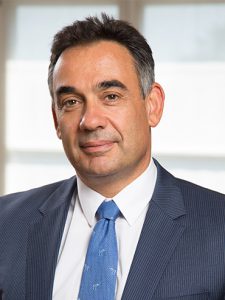 Pavlos Photiades studied Economics at Harvard College, Harvard University from where he graduated in 1988 having been awarded twice the Harvard College Scholarship Award for academic achievement. He also holds a Master of Business Administration degree from the INSEAD business school in France.

He is currently the Managing Director of Photos Photiades Breweries, which during his tenure as M.D has become the leading Brewery and Beverage Distribution Company in Cyprus, with subsidiaries in Greece, Romania and Croatia. He is also the Managing Director of Photos Photiades Group, which during the same period has expanded into new fields and today is one of the largest business groups in Cyprus involved in Beverages, Financial Services and Real Estate Development.

He has served on the Board of Directors of several public companies in Cyprus and Greece, and is currently serving a second term on the Board of Directors of the Brewers of Europe as an elected Vice President. In addition to being the current President of the Cyprus Institute of Neurology and Genetics, his varied interests lead to his ongoing appointment as a member of the Executive Board of the Cyprus Olympic Committee, former Chairman of the Cyprus Ski Federation, Chairman of the Harvard Alumni Association of Cyprus, former member of the Board of Overseers of the University of Cyprus and one of the founders of the International Association for the Protection of Human Rights in Cyprus.

He was appointed to the ERAB Board of Directors, representing the industry, in November 2016.